INGA, INGER, STEFAN, SHIRA – no, my caps-lock is not broken. It looks like a record year for all-capital letter artists, and I’m wondering do we pronounce them in that style too. Instead of Inga, it’s INN-GAAAH in a loud, booming style of voice. Perhaps we just yell their names, and it would be cool if those wacky Estonian presenters you often see at Eesi Laul actually do this, and do it every single time mentioning their names. Perhaps the jury do it too.

It’s a curious Eesti Laul 2020 with many solo female artists and many returning artists from last year. It’s always fun listening to new names, while it’s impossible not to immediately compare new songs of returning artists to their previous ones and prematurely judge them. Then there’s the classic Estonian eclectic ensemble that appears each year to really add spice when trying to find your favourites. For me, four jumped out immediately as big likes, and then a few others emerged over subsequent listens.

My first impressions from early December 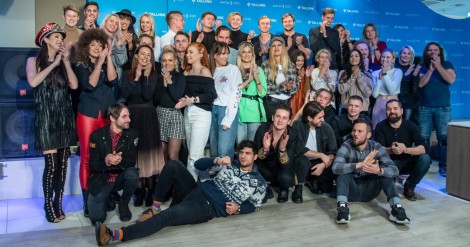 It’s rap, so typically that’s an automatic disqualification for me. I can actually listen to it once, and the frankfurt choreography in the video is impressive.

Folksy band. Got quite annoying, mostly that repetitious “Leelo”.

Dull hip hop style that was much better on the second listen. Great title and intro effect.

It’s very simplistic glam rock so will need a high octane performance to do well.

A bit too slow and uneventful for me. Has potential to enamour the audience so wouldn’t be a surprise to do well.

Had a strong entry two years, finishing third. This is not quite to that level, especially as it lacks the soaring vocals of This Love and gets repetitive. It’s still quite engaging, with its thigh-slapping vibe.

Another artist backing up, and with fairly much the same sort of song. Only finished 6th last year so can’t see this making a greater impact even if I like it more.

The overwhelming (and ridiculous) jury favourite last year that ultimately succumbed to the televote in one of the most dramatic voting sequences seen anywhere. By My Side is the same sort of sappy, piano style of ballad as his 2019 entry, Without You, so he’s banking on perseverance and a bit of sympathy, rather than a change up, to get the win. I can actually tolerate this far more than Without You.

Another of those solo women with a decent pop song. It’s nice enough without standing out from the rest.

Fun pop, a bit repetitive, and not to the standard of her entry last year. It took a few listens to really get into it.

Traffic have been around for ages, and contains Stig Rasta, who achieves more Eesti Laul success with his side projects. It’s Traffic by the numbers, being the catchy soft rock style, so expect them in the final and mid position. Victor Crone, the Swede that teamed with Stig Rasta to write Storm and appear for Estonia last year and is trying for Sweden this year, has a songwriting credit. Dare I say a quid pro quo?

It’s a nice lazy, country folksy thing. It’s interesting and nicely constructed. Twelve songs go to the final, so this would make it for me.

Another returnee, and again the same style of infectious “schlager” style pop. Likely one of those to scrape into the final like last year, even with the addition of Väliharf adding some crusty male vocals. Shows the evenness of Eesti Laul this year when a song scoring 7 out of 10 can’t make my top 10.

Violina appeared in 2012 with Birgit (Estonia’s 2013 Eurovision entry) and Rolf Junior in 2010, and Heart Winder is the similar style of catchy pop distinguished by Violina’s electronic violins. Unfortunately, the violin trio aren’t as prominent as usual, and that holds it back.

Nice, moody jazzy style. It gets me swaying. I can see this qualifying, especially if it’s a jury favourite.

A slow, dramatic style, which should get huge attention with a strong live performance. Vocals are superb. Written by Jaagup Tuisk too.

So many solo females this year, and this is one that competes with most of them. Along with Little Mess, this has been the one most often stuck in my head. Merilin will need to make the most of the final phase of the song to help lift it into the final, otherwise it might be seen as something good, not great.

Featuring the unmistakable vocals of Laura and an interesting western theme, it’s not her strongest ever. Not by Sven Lohmus and his famous heavy electronic style, whom we mostly associate with Laura, though it carries similar hallmarks.

This is that classic Estonian pop style, and very engaging. Such a soft voice and a soft start, then builds nicely into the chorus. It’s quite hypnotic. Probably lacks sufficient punch to reach the final. No idea who the person is other than the songwriting credit is also to her.

This is so addictive and was my favourite upon first listening to all the songs in early December. Janet has a lovely, slightly husky tone to her voice, and I love her pronunciation. The song really builds through the verses and then bounces into its engaging chorus. There’s no bridge to it, which hurts its potential, as it’s just verse, chorus, verse, chorus. So I’d be curious to hear if there’s a longer, original version of it. I have no idea who she is, so look forward to finding out more. She reminds me of Kadiah last year – someone living the dream. Hingelind means “the bird of your soul” – essentially, your soul is trapped and weighed down by past attachments, memories and ideas, and to free your soul, to let it soar, you need to release your thoughts and emotions first. Having gone through the loss of my mother last year, I can certainly empathise with this. Of course, these emotions are not so easy to release, so when the day comes that bird eventually soars, I’ll think of Janet and Hingelind.

One that really stood out on the first listen, and could do similarly on stage. Quite a dramatic song as it shifts through the moods and emotions.

Last year’s (unhappy) runner-up, Uku is back with a song at least as strong as Pretty Little Liar with this big, powerful and emotional ballad. While it follows a standard formula, it has the charismatic Uku to compensate, who’s likely to leave it all on the stage, including a ripped t-shirt.

Three girls with great harmonies, so we know already where the comparisons will be. With O’G3NE! They were the Dutch trio at Eurovision 2017 and were quite mesmerising with their harmonies and their complementary voices. These Estonian girls take it up a notch with their stirring and evocative song and a vocal showcase of soft voices and exquisite harmonies. I especially love the “gonna run, gonna run to you” overlay through the chorus. I’m so hoping they can pull it off live. Tanja Mihhailova (Eurovision 2014) co-wrote it.

Uku Suviste seems the obvious one, especially after the narrow loss last year, and he’s brought another great song. Jaagup Tuisk seems to have a bit of a following. Just remember, the winner is decided by a 100% televote super final so the more artistic types of songs getting plenty of hype often fall flat. Think of STEFAN last year, who ran away with the jury vote, only to be a distant third in the super final. In 2016, the much hyped Mick Pedaja with Seis couldn’t even make the super final after receiving only moderate support from the public.

Twelve go to the final, and my top 12 has equal representation from each semi final. Expect the names like STEFAN, Rasmus Rändvee and Laura to get through and prod around near the top of the scoreboard. I suspect Shira will make it because her song is so interesting. Difficult to tell with Janet. Obviously I hope she progresses. Sadly not much love around for Little Mess, other than in this little messy part of the world. Their one great strength is they will be a unique commodity on stage and have an engaging song, so it’s just a matter of giving the audience something memorable. Remember, no one rated O’G3NE in 2017, and they finished fourth in the semi final and 11th in the grand final. So I’m sensing a surprise result at Eesti Laul.