It was an uninspiring pair of Eest Laul 2020 semi-finals, notably due to the basic presentation of most songs, and there seemed to be technical problems with the audio. Or it could have been simply a raw capture of the vocals. Suffice to say, the less gifted vocalists did struggle to hold steady notes, and pitch was an issue for many too. Exacerbating the lacklustre feel of the semi-finals, the results were utterly predictable. Expect the final to be just as predictable too. 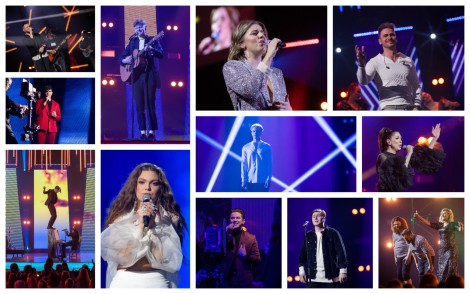 This year’s edition of Eesti Laul was notable for the many solo women involved, and just as notable is that most of them failed. Of the four in the first semi-final, plus the trio Little Mess, only Laura progressed, and she had to rely on a televote wildcard spot. Out went INGA, Renate, Little Mess and Jennifer Cohen. The second semi-final was a bit better in that SHIRA made it (albeit by televote wildcard), and technically Inger was another qualifier. Out went Janet, Merilin Mälk and Mariliis Jõgeva. Of course, the solo males didn’t have anywhere near the trouble, with all three in each semi-final progressing.

My favourites rarely correlate with actual results, so no surprise I lost half of my top 10 in the semi-finals. From my top 12 – the actual number of entries in the final – my 11th and 12th picks got through, so I got seven of 12.

Little Mess – Without A Reason

My favourite entry this year struggled to replicate the beautiful harmonies from the studio recording. This is always a tough ask with vocal groups, and the occasional pitch issue didn’t help either. I feel if they kept it a bit more simple, sitting on stools, and really concentrated on nailing the vocals, they might have done better in the first semi final. We won’t know how far off they were from a spot in the final as the final finishing positions won’t be revealed until after the final.

My favourite on first listening to all the songs, and then dropped to fourth in the eventual preview. The same reason for that plagued her in semi-final 2: the song took too long to get going. The verses are too long, and Janet had pitch issues too. She did her best with the presentation and she seemed to really enjoy the experience. Thanks for coming, and the interpretation of her song will always have special meaning (detailed in the preview).

My tenth favourite was the only miss I felt was an injustice. German and the violin trio gave a stylish and impressive display. They really stood out from the pack and certainly would have made the final more interesting instead of the boring Inger (thankfully seems to have dumped the “INGER” presentation of her name).

Of the other two of my top 10 that missed out, Renate and Merilin Mälk, again, they were pleasant songs with not much more to them. Renate was the one I’d liked to have seen progress, as it’s that classic Estonian pop style I love and the subject matter is videogames. For the rest that didn’t qualify, you’d couldn’t really make a case for any of them. Perhaps Ping Pong by Jennifer Cohen might have been a worthy addition, especially with the ping-pong sound effect well used in her song and it being one of the best presented entries. Ping Pong also had one of the best lines in a song I’ve ever heard: Please don’t play me like a ping pong, bitch. The whole song used ping-pong analogies to describe a relationship. Impressive.

All songs from the semi-finals can be viewed on the official Eesti Laul youtube channel. Or reach it by clicking the title of one of the videos above.

I really should put this lot into Club Boring: Inger and STEFAN are boring, period; Rasmus Rändvee has a boring song. I’m sorry, Uudo Sepp, I probably messed up not placing you a bit higher. You performed your song well. It’s just that others are better and more interesting. Let’s just say, of my least favoured bunch, you’re my most favoured!

I really thought Laura’s microphone was dropping out, such was the crazy volume spikes in her voice. It actually looks like that’s her actual vocals. Some notes she finished so abruptly that it’s like they were clipped, and others suffered similar damage due to her dragging the microphone away from her mouth to early. Adding to the mess were the nonsensical pre-recorded video sections. I was amazed she qualified, even via the televote wildcard. Obviously her fanbase (of which I am one) is strong. I’m certainly hoping for 1000% better performance in the final.

When you think you’ve seen enough Traffic over the years, this was a pleasant surprise and they really well performed. Deserved to be the finals; will probably make up the numbers there.

Anett x Fredi – Write About Me

No surprise this jazz duo made it to the final as I always liked this moody song and they were a quality act on stage.

This surprised me that it got through to the final in the first round of voting (combined jury and televote), even though I shouldn’t have been surprise because it was so much fun. It’s old-style Eurovision “schlager” and the addition of the gruff Väliharf made it all the more interesting. Who knows, the Estonians could be smitten with this and it surprises in the final. Synne could only imagine 11th last year on her own.

SHIRA – Out In Space

My third favourite heading into Eesti Laul, and was rapt she reached the final. It’s a big moody, dramatic song, so looking for SHIRA to produce something interstellar in the final.

Uku Suviste – What Love Is

Uku was my second favourite coming in, and produced one of the strongest performances. It’s an infectious song and his vocals held up. Expect even better on the bigger stage at Tallin’s Saku Big Hall, or Tallinnas Saku Suurhallis as the locals say.

Beautiful lie, beautiful song, beautifully performed, and the vocals were as immaculate as could possibly be. There’s obviously a strong hint of last year’s Eurovision winner, Netherlands’ Duncan Laurence with Arcade, and Beautiful Lie adds an excellent choreographed routine to enhance it.

Egert Milder – Georgia (On My Mind)

The biggest surprise packet in all the semi-finals, my 12th pick was the logical best song from the first semi and should produce a top result in the final. Excellent performance and vocals really rounded out the infectious nature of this song. Interesting fact is Egert is the husband of Piret Jarvis, who, as part of the Estonian band Vanilla Ninja, represented Switzerland at Eurovision 2005. The band’s lead singer, Lenna Kuurmaa, has several times tried to return to Eurovision as a solo artist. It will be interesting if Piret beats her there by being Egert’s wife and, who knows, she might get a spot on stage too.

Uku Suviste was peeved last year at finishing second, especially losing to a Swede (Victor Crone). He joked that he was the only Estonian in the super final (the other entry being STEFAN of Armenian background). This year he’ll likely come second again, and not be as peeved, as Jaagup Tuisk will be the deserved winner and try do something incredibly rare at Eurovision: copy the previous winner’s style and win the following Eurovision with it. While I don’t have much emotional investment in any of the entries in the final this year, if Uku Suviste won, I’d be happy, because he was so close last year. If Egert Milder won, I’d be extra happy, especially with the Lenna and Vanilla Ninja connection.

For those that have never watched Eesti Laul, especially for those in Australia where the semi-finals started at 4.30am, I recommended getting the ETV app on your mobile device and watching at a sane time. With Chromecast, you can transmit it to your TV easily and, most of all, skip all the crap. There is a lot of filler in these shows, and Eesti Laul makes it worse by creating a separate results show. A news show is broadcast during the break. On the app, you can easily find the separate shows and watch with expediency. There’s no spoilers either. The app shows the entire schedule for the day, and the date can be changed by scrolling left or right near the top. Note that the app picks up your local time, so might default with the Sunday schedule even though you want the Saturday one. So scroll left for the previous day.