A year after finishing second in Eesti Laul, Uku Suviste finally learnt What Love Is. Winning! Suviste reversed his misfortune in 2019 when finishing second to Victor Crone to beat Jaagup Tuisk at Tallin’s Saku Suurhall on Saturday night. After a round of voting that combined an international jury and the public vote, it was down to Suviste vs Tuisk in the super final after the jazz duo of Anett x Fredi were announced as finishing third. In a minor surprise, a clearly emotional Suviste overcame Tuisk’s Beautiful Lie to win Eesti Laul and his spot at the Eurovision Song Contest in Rotterdam in May. After last year’s heartbreak, and knowing he was the underdog in this match-up, Suviste suppressed his emotions and expectations during the final announcement phase, before finally being overwhelmed when stepping onto the stage to take his applause and reprise his winning song.

Uku Suviste wins Eesti Laul 2020 with What Love Is

While Tuisk was a warm favourite heading into the final, in truth, they were both a step ahead of the rest, and the key difference was likely that Suviste simply had the better song. He gave a rousing rendition of his engaging power ballad, What Love Is, whereas Beautiful Lie was more a theatrical stage act with fragments of a song added around it. With the public likely sympathetic to avoid another second place finish for Suviste, that was enough to push him to victory. I know I raised my arms, clapped and cheered when Uku got his prize. The crowd seemed to telegraph his win, too, when Uku got the biggest cheer when the artists were paraded before the show.

Six songs contested Eesti Laul 2020 in yet another quality contest. You might have heard rumours there were 12 songs. Not so. Organisers placed the weakest and most boring songs that qualified from the semi-finals as the first five songs of the show and one at the end of the show. That meant that Eesti Laul didn’t really start until song 6, Uku Suviste, and finished with song 11, Egert Milder. Otherwise it would have made for one of the weakest Eesti Laul finals ever. Eesti Laul has a reputation to uphold, so it’s best we just ignore these undeserving entries ever made it.

First, an important announcement. From this point on, this blog will not indulge artists that need to present their names in all capital letters just because they can’t manage their inferiority complexes. We had INGA, INGER, STEFAN and SHIRA this Eesti Laul, with INGER seeming to become Inger after the semi-finals, and now it’s back to INGER. It must stop.

The first member of Team Boring for this Eesti Laul, and just after half-way through the song, I was already wanting to move on. It’s the same unappealing, uninteresting Inger we’ve heard for two years now. Great for a campfire; not great for the Eesti Laul stage. 4/10

Team Boring presents their second song. For someone with such a great voice, this should have been an insult to Rändvee to even dare try it on such a stage. Heck, I was insulted just listening to it. Well deserved last place. 3/10

The final member of Team Boring. The only thing of note from this sap-fest was a few decent vocal elements and Stefan’s dopey hair. 4/10

Finally some energy! Got 8 points from one the of the jury members, so that was cool. This needed a big finale to bring it home. Instead it just ran its course. 6/10

Another rule I have: No punctuation in song titles! So out goes the full-stop after “Sorry”, sorry! Uudo’s personal and emotion rendition of this song was the real strength behind it. Unfortunately he hit an Eest Laul with so many strong artistic songs that that I’m Sorry I Messed Up was largely forgotten in the results, finishing tenth. 6/10

I actually expected a bit more vocally, and the presentation in general was a bit understated. Still, Uku has a great, natural stage presence, and this was always an infectious song, even if it lacks originality. 8/10

Did well to finish third on the jury before the public brought her back to Earth as only their seventh favourite. Great, dramatic song; it just lacked some intensity on stage. Shira tried to add a bit by starting on a piano before walking around stage in her flowing white gown and waving her arms about. In retrospect, since she clearly doesn’t have a big voice, she needed to keep it more subtle. Either be on a stool, or even stay on the piano a bit longer. She left it only after 10 seconds into singing the actual song. Of course, the piano kept playing. Nuts! 7/10

Easily the most professional, artistic and vocally impressive performance of the night, and that’s saying something for a slowish, moody jazz song. I was entranced by every syllable pronounced by Anett, it was that perfect. Of course, it’s slowish, moody jazz, so it  will never bring the house down. The duo would be ecstatic with third, and it was lovely seeing Anett so emotional in the green room as she collected 12 points from many of the jury, then won the jury, then reached the super final. 8/10

This was a song I never rated that highly when simply listening to all the songs. It was a beautiful lie in itself. In essence, as good as it was, it was mostly a stage act. There wasn’t much of a song there, and it is meant to be a song contest. 8/10

Impressed in the semi-final; didn’t as much in the final. Got a bit lost being parked among the really strong contenders. 5/10

I was worried this might lose impact after it was the surprise performance from the semi-finals. While it’s really only the Georgia, Georgia, Georgia sections that make it, not to forget Egert’s ability to climb on top of the piano with ease (I don’t care how much he practiced it or the small protruding steps that helped him, it was still a feat), it held up well and deserved its 4th place. 7/10

The big mess from the semi-final did improve a bit. It was still a bit messy, with the video footage part of the performance simply not working, and Laura unable to vocally present the song to an acceptable level. Again she sounded choppy, while attempts at some high pitch notes were laughable. Laura is much better than this. 5/10

The right song won. Actually, any of the top 3 would be worthy winners. I scored them all the same, and each had different strengths and weakness to make it difficult to split them. I’d say Uku Suviste has the most room to grow with his song, whereas Beautiful Lie is already so tightly choreographed that there’s not much room for change while you can’t do much with jazz other than perform with aplomb like Anett x Fredi did.

There’s been the usual whingers online saying Estonia just denied itself a possible win or top 5, gaining a likely semi-final exit instead. Fans need to remember, each nation chooses the song they feel is right to represent them. Eurovision results are not the be all and end all. Often it’s about national pride and winning your national final is more important. Chances are Jaagup Tuisk would be seen as just a copy of last year’s winning song, Arcade, and ignored. It’s happened so often before. As for Uku Suviste, as long as he can deliver some big vocal moments, it should be easy to the grand final, especially since you only need to be top 10 of 17.

All performances can be viewed on the Eesti Laul youtube channel or reach it by clicking the title in one of the videos above.

Full scores, including semi-final results, have not been released yet. All we know is Uku Suviste scored 33582 votes in the super final, and judging by the crowd reaction in the hall, it was a dramatic result.

That’s Piret Jarvis on the left, formerly of Vanilla Ninja (Eurovision 2005 for Switzerland), and husband of Egert Milder (right).

Full results were released a day later and the most striking aspect is that Uku Suviste was the people’s overwhelmingly favourite all the way through. It wasn’t even close. In such a situation, you can’t doubt the people’s choice.

Anett x Fredi won the jury; Synne Valtri the televote. Little Mess, my favourite song this year, were sixth overall, including second on the televote. They were then strangely deserted in the public wildcard round, finishing seventh of the eight remaining songs. Laura squeaked into the final by just 11 votes ahead of Renate. That’s so annoying given Laura was a trainwreck and I really liked Renate’s Videomäng.

Jaagup Tuisk won the jury vote comprehensively; finished third on the televote behind Uku Suviste and Mariliis Jõgeva. Suviste dominated the televote to the point his tally was more than the combined total of Tuisk and Jõgeva. Jõgeva finished fifth overall, then, like Little Mess, was strangely deserted in the public wildcard round and finished seventh. What is it with Estonians deserting their initial favourites? You’d think they’d rally behind them.

Uku Suviste dominated the televote by an unimaginable margin, tripling Jaagup Tuisk’s score, with Anett x Fredi just behind in third. Anett x Fredi were the jury’s favourite, with Suviste fourth behind Tuisk and Shira. Tuisk won the combined vote ahead of Suviste and Anett x Fredi to be the three super finalists. The super final is decided solely by the public and the results mirrored the first round of voting almost exactly: Suviste tripled Tuisk’s vote tally, with Anett x Fredi just behind in third. You see why this format works so well. Artistic songs get their chance to excel, while the people ultimately get to decide. 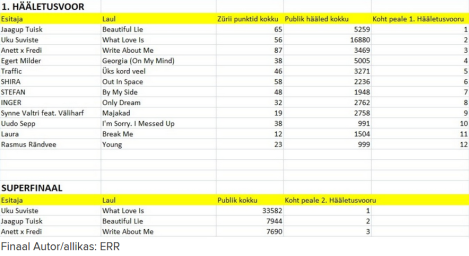