Estonia, what they hell were you thinking? International juries are the scourge of national finals, and in a country that prides itself on their certain unique quality, it was stunning to see people from the likes of Norway, Latvia, Hungary and even the United States of America. If one person from the USA wasn’t bad enough, we had, incredulously, four in total, delivering votes from renowned European cities like Los Angeles and Boston. Who are these people? More importantly, why? 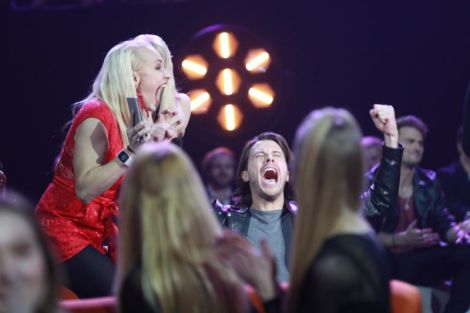 The problem with international juries is their tastes are so derivative, with often the most generic, superficial and bland songs appealing to them. Even if they go for something a bit more esoteric, they’re all likely to go the same way because they all have a similar mindset and unlikely to appreciate cultural subtleties, especially foreign language. Eesti Laul 2019 was the perfect case in point, with Stefan and his ultra dreary song, Without You, careening away with the jury vote with a total of 70 points, which included maximum points from three of the Americans. You can actually see the appeal Stefan had to them because he presented himself as a serious musician, complete with piano on stage, unique image and a slick performance. Being of Armenian origin, he looked a bit different from the refined, clean cut Estonians too. The catchy Milline Päev by Inga was way back in second on 46 points, equal with another dreary and generic song, Strong, by Sissi. Favourites like Uku Suviste and Victor Crone were way back way in sixth and tenth spot, respectively.

Credit to Estonia for one thing, as they at least know how to do a proper 50/50 points system. The jury scores are converted into Eurovision style points, meaning Stefan got 12 points, with Inga 10, Sissi 8, Uku 5 and Victor 2. It still didn’t look good for Victor, so naturally it was a huge relief when he squeaked into the 3-song super final courtesy of getting more televotes than Sissi after they both finished level in third with 14 total points. Victor won the televote with Uku second, Inger and Coming Home in third, and then Stefan in fourth. Total points were Stefan 19, Uku 15 and Victor 14.

Not that anyone knew it at the time, that Victor had won the main televote meant the odds were in his favour to win the super final. That he did, and with that his ticket to Tel Aviv for the Eurovision Song Contest in May. 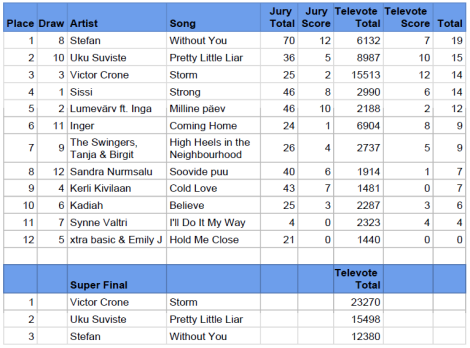 Talk about riding the storm. It should never have been this close, and it was only because of the bizarre decision to use an international jury this year. Estonia seems to be in a mode of trying to copy Sweden. Don’t do it! Melodifestivalen has been suffering since they went down the path of international juries with so many trashy contests in recent years. You are Estonia. Eesti Laul became the best and most interesting national final because Estonians are proud of their distinct and interesting music scene. Remember Eurolaul (Euro Song)? That experiment, notably between 2004 and 2008, in trying to mould a winning song to do well at Eurovision saw you sell out your soul, and results were a spectacular failure anyway. So you became Eesti Laul. The song for Estonia! Never forget that. It’s the song for Estonia to be proud of, not for dopey outsiders who couldn’t care less if your national final fell into decay.

The seven member jury were: Stig Karlsen (Norway), AFSHeen (USA), Guna Zucika (Latvia), Ben Camp (USA), Cyrus Said (USA), Lorinc Bubno (Hungary) and Josh Cumbee (USA). One of the reasons for them was to provide a jury seen as neutral because, due to the small nature of the local music industry, it’s difficult find Estonians without a connection to any of the artists. That’s difficult to accept as locals were fine in previous years, fine for the semi finals, and it’s still no excuse to go 100% foreign, including four of the seven as Americans.

The full release of the semi final results revealed Grete Paia with Kui isegi kaotan, my favourite of Eesti Laul 2019, only finished sixth in semi final two, finishing 11th with the jury and second with the televote. With the televote winner, Uku Suviste, automatically to the final, that meant Grete led the televote of the remaining eight songs vying for the two televote wildcard spots. Strangely, her televote almost halved, leaving her in fourth place of the remain eight, while Inga’s nearly doubled to leap her into the final. Synne Valtri, only just behind Grete’s televote after round one, accumulated a little more in round two to be the other wildcard qualifier.

The first year with twelve songs and I’d say it worked. It was always an even bunch and I guess the point is that by adding two extra songs, and four in total for the competition, is that four more acts get some exposure. Just be aware that the quality doesn’t get diluted, that’s all. All images courtesy of ERR. 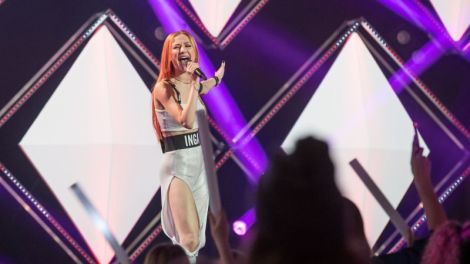 This song got stuck in my head so much during the week, and I’d have bumped it up in my grand final preview a few spots if I did it all again. A very catchy song, and I love a girl that needs a constant reminder of her own name. Finishing ninth on televote was somewhat a surprise. Mind you, she only crept into the final as a televote wildcard. So fifth overall (no, I’m not thanking the international jury for this) was a decent result. 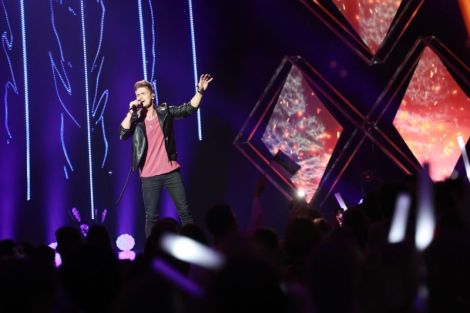 This was always one of the stand out songs this year, and Uku delivered it well. It was probably favourite to win after the jury phase given Victor Crone was so low in the results. When he and Victor swapped jackets during the interval, he probably felt like cutting it to shreds, as Victor’s relief at qualifying was no doubt Uku’s dismay. 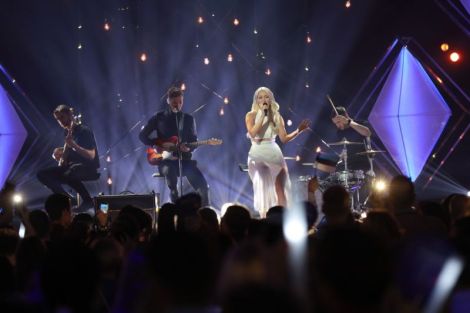 A great choice to break out from the beige brigade of her semi final and go all white for the grand final. Kerli delivered again a song that required really sweet vocals. In hindsight, the song was never a strong enough contender, so ninth overall was sort of about right. Her only points came from the international jury, who placed her fourth. No, I’m not thanking them, as the Estonian jury rated her highly in the semi final and would have done again in the final! 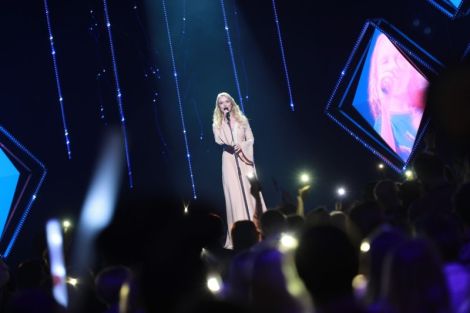 It only took a few lines before I felt my heart sink for Kadiah. For the first time, I didn’t quite believe. Perhaps expectations were too high, or I had experienced Believe enough already. For whatever reason, the song didn’t quite connect anymore. Perhaps the backing track and backing vocals were a bit too loud, so something more subtle in arrangement might have suited better. Eighth place on both jury and televote for 10th overall was disappointing, as I was hoping Kadiah would be contesting for the super final. Anyway, it was still a lovely, soft performance, and Kadiah provided a memorable journey through the Eesti Laul process. She was so active on social media and she exemplified the strength of these national finals and Eurovision itself. It’s about discovery and emotional investment. Thanks for the ride and, of course, the beautiful song, Believe. 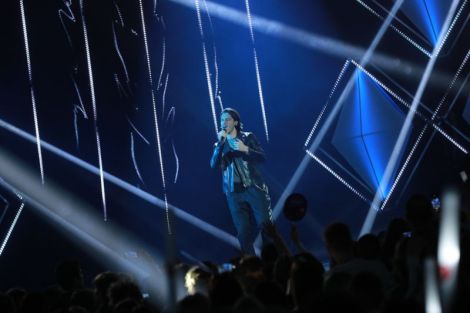 Just like last year, the year before, and in 2015, I agree fully with Estonian public’s choice. Storm was the stand out song in the first semi final, and after starting eighth in my Eesti Laul preview, jumped to second in my grand final preview, and now was the best song after the grand final. It’s just one of those songs that’s really polished, sung well and presented well. While it doesn’t break any moulds, it does everything else right, and that’s why it won Eesti Laul. Even with Victor being Swedish wasn’t a problem. Heck, if an Aruban that helped win Eurovision for you 20 years ago still can’t speak Estonian, it shouldn’t matter that a Swede can’t.

Interview with Victor Crone – Will Sweden give Estonia 12 points?