Australia have been confirmed to compete in the Eurovision Song Contest for the next 5 years, up until 2023. The decision was made by the Eurovision Song Contest Reference Group, with Jon Ola Sand, Executive Supervisor of the contest on behalf of the European Broadcasting Union and one of the permanent members of the Reference Group, labelling it a “natural progression”:

“We are delighted that Australia has become a more permanent member of the Eurovision Song Contest family. The Australians have long been huge fans of the event with a great number of loyal viewers year on year and when they were invited to participate in the 60th anniversary edition of the Contest, we couldn’t have imagined quite how popular their artists would become. It was a natural progression for us to agree to their inclusion as a participant for the next five years as they bring so much to the table and we very much look forward to welcoming them to Tel Aviv to perform, alongside the 41 other exciting participants in what’s sure to be a fantastic celebration of music.”

Curiously, inviting countries into the contest is not one of the Reference Group’s tasks:

The Reference Group is established by the Television Committee and its tasks are:

The Reference Group meets four to five times each year on behalf of all Participating Broadcasters, and is required to take decisions in the general interest of the ESC.

This blog has been open in saying Australia should not be in the Eurovision Song Contest. First, there’s the preposterous notion that a country on the other side of the world should be involved in fundamentally a European event. We’re not even anywhere near the right timezone, which compromises viewership and voting. It’s utterly absurd and is the key complaint from Europeans. We’re not in Europe, we’re not linked to it, we don’t belong in it. It’s that simple. Second, the event we once watched with wonder from afar and took a broad interest in has become the latest jingoistic fad and an excuse for a boozed-up pre-winter escape. This has actually had a detrimental impact in overall interest, with TV ratings plummeting since Australia was involved. From 592k viewers for the prime time Grand Final broadcast on Sunday night in 2015, last year was 208k viewers. The semi finals are suffering too, notably the one without Australia. Too many of us are treating Eurovision like sport, obsessed with our song and our chances of winning, and that’s damaging the overall Eurovision experience and betraying its core ethos of being a celebration of music. We can’t even be honest with the number of viewers watching. The claim that 2.9 million watched in 2018 is fantasy land.

Dami Im, second for Australia at the Eurovision Song Contest of 2016. Image: eurovision.tv

Since I’m only one Australian fan of Eurovision, I don’t represent everyone, and most fans are excited about another 5 years. So let’s check the good, the bad and the ugly.

It stops the stupid ad hoc yearly invitation process that started with a special “one off” appearance for the 60th anniversary edition that was held in Vienna 2015. From there, Australia got another invitation because their debut was such a success. That Dami Im came second in 2016 meant the same reasoning had to follow for 2017. Then it’s become problematic. Isaiah Firebrace was a disaster, and Australia was only saved from semi final humiliation and a near-bottom finish in the grand final by the jury. While Jessica Mauboy qualified from a weak semi final in 2018, she was humiliated with a last place televote in the grand final. Also remember Dami Im’s televote was 129 points less than her jury vote (320 to 191) and cost her the win. None of this matters now. Australia has 5 more years. It’s settled.

Provides some certainty for SBS and Blink TV to evolve the Australia Decides national final that started in 2019. This proved a great success with artists, while not at the upper echelon of the most successful domestic artists, embracing it with enthusiasm, commitment and camaraderie. It rated 40% higher than the marquee Sunday evening broadcast of Eurovision Song Contest Grand Final last year. While the 282k is a small number by Australian standards (over 1 million is common for popular shows), it showed Australians have an appetite for a live locally flavoured Eurovision type of event in a decent time slot.

The reasons for extending participation for 5 more years are nonsense. There’s nothing in the rules saying that eligibility is obtained by broadcasting the event for 35 years, being huge fans or sending popular artists. All these claims are exaggerated too. SBS is a niche “multi-cultural” public broadcaster with niche appeal, so Eurovision fit the bill in those early years. Even today, Eurovision barely hasn’t gone far beyond niche appeal. The majority of the public ridicule it, while the music industry is typically disdainful of it. Two years of a shocking televote also shows at least two artists were not popular. Australia’s history with Eurovision certainly deserved some recognition. That was the special “one off” appearance, no more.

Rules of the Eurovision Broadcasting Union clearly state only members are eligible for Eurovision events, and to become a member, a broadcaster must lie within the European Broadcasting Area. That area extends into the Middle East and North Africa, hence, Israel are free to enter, as are the likes of Lebanon, Jordan, Egypt and Morocco. It means Australia can never be eligible and must remain an associate member. Associates, which include broadcasters in about 20 other countries, are not granted access to Eurovision events. Clearly the EBU doesn’t care about its rules. That’s unless you are Romania, where you are booted out of the 2016 event for unpaid debt. Incidentally, that’s debt only an actual member can accumulate, not an associate. Curiously, Kazakhstan, which is keen to enter Eurovision and has territory in Europe, is locked out because the EBA does not quite reach it. 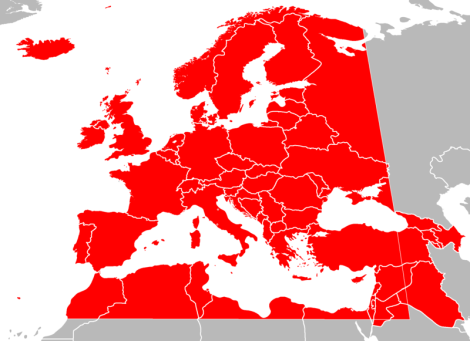 After 2023, what happens? Is Australia kicked out after 9 years? No. This looks like a permanent spot, so it’s even more egregious that the EBU is still fooling around with ad hoc decisions. Speculation was that with Eurovision Asia in the process, Australia was providing valuable promotion of Eurovision in Asia, so was filling its time in Europe before moving its Eurovision activity to Asia. Eurovision Asia now looks more distant than ever, so better to keep Australia in Eurovision.

The whinging that Australia is not in Europe will continue. As will the ignorant responses that neither is Israel. These are the problems you get when being dishonest, breaking promises, and flouting your own rules. Similarly, Australians and supporters of Australia are selfish, justifying their inclusion with nonsense like Australia has a European culture or most people are of European descent. By that logic, USA, Canada and the entirety of Latin America should be in Eurovision. It might surprise many Australians that Eurovision has been shown across Latin America for many years. As for it being reasonably popular on TV, so is European football, yet you don’t see the Socceroos playing in the European championship.

The situation about hosting isn’t resolved. While the EBU was adamant it would be in Europe if Australia won their special “one off” or second appearance, they are all quiet now. Reality is, as long as SBS want it, it would be in Australia. Similarly, the 9pm Central European Time requirement (5am Australian Eastern Time) for the live shows would likely be bent. Again, it’s one rule for Europe, one for Australia, so the discontent will continue. If there’s another televote backlash against Australia, the EBU must end this nonsense, change their eligibility rules, add or invite more countries, and show Eurovision is truly open to the world.

One response to “Australia in Eurovision for 5 More Years – The Good, The Bad & The Ugly”