A glorious stage, superb graphics, a mostly dreary selection of songs and an obvious 10 finalists. That’s the summary of the first semi final of the Eurovision Song Contest of 2019 in Tel Aviv. In fact, until Belarus came along as song 8, it was mostly all so forgettable. It picked up from there, accept for a few potholes like Georgia, Belgium and Iceland, and the crater left behind by Portugal. 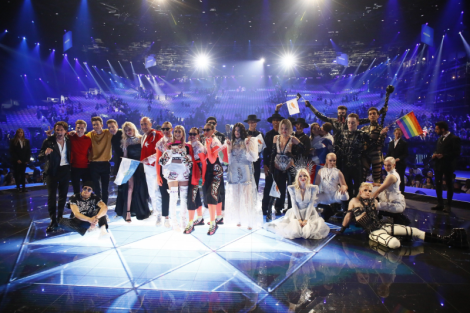 Even though we knew this was a weak semi final, it still disappointed. You hope that a few acts would lift their game, present the songs really well, or even lift them vocally. Nup. There was very little of that, with many not using the stage well. The 3D nature of it, while impressive on TV, created too many different focal points, and the distance between the performers and the audience was too large. The only highlight was several acts brought an impressive visual ambiance, particularly graphically on the high resolution back-drop.

Distinct voice and superbly stage. The song not quite holding up is this entry’s main limitation.

Being the highest ranked semi final song in my Fab Five and one of the biggest outsiders in the entire competition, this was the only song I really wanted to qualify, and Zena did it! She’s so talented, and apparently did all the choreography herself. The visuals were interesting to say the least, with Zena’s head split in half and a white tiger running through it. Perhaps that’s just her breaking the rules. She’s such a great singer and performer all round, and really delivered with a quality song, presentation and vocal display. Like It? Love it!

Instant goosebumps and lush visuals were the trademark here. The only ballad of the female and power variety, it was destined to stand out and qualify. Forget her failure as part of Moje 3 in 2013, she succeeds as Moje 1.

A decent opening to the show of a song that brings the same formula as Fuego did for Cyprus last year. While Replay is slightly better song, it severely lack in presentation in comparison. No doubt the automatic 12 point head start from Greece would have helped Tamta. It’s the fourth straight year Greece and Cyprus have been in the same semi final. The EBU are utterly clueless!

Really messy performance, and disturbingly over-sang parts of the song. It’s a song that excels for being something softer and then builds, and the “come on” to the crowd was really try-hard wannabe in the worst extreme. Estonia’s recent history is of trying to artificially elevate their songs and it doesn’t work. They just look stupid. Lucky to be in the weak semi final, and plenty of work to do for the final after a week of rehearsals in which they admitted to really struggling with the background screen. Personally this was nothing compared to the Eesti Laul performance.

A nice groovy performance of a catchy song.

Wise decision to go with a space theme as viewers at home more readily grasp the simple stuff, not the abstract that was tried at Australia Decides. Zero Gravity immediately evokes space, so the literal presence of Kate and floating in zero gravity really set the tone for a memorable performance. The minor updates to the song really worked, making it more pop and less opera, and Kate hit those difficult lower notes much better. Zero Gravity was always the song of the 10 at Australia Decides with the best potential to succeed at Eurovision. That so many Australians had doubts she could even reach the final is a travesty to an artist high in artistic quality and attention to detail. I’d also like to note today marks exactly one month since the passing of my mother. She loved Kate at Australia Decides, and it’s fitting that was her last Eurovision event with us and that Kate delivered a performance so stellar in Tel Aviv it might have reached the heavens for her.

Passable beat and sound, horrible song, I still hate the growling, and I’d be curious to know how the jury rated it when one of their criteria is to judge vocals. I would love to have seen this fail. While they boast about being anti-capitalists, it’s all a cover for the anti-music they bring.

No charisma, can barely sing, and dreadful microphone skills. It was only the combination of an infectious song and the misfit nature of the entire production that gave it any merit.

Nice sound and appropriate simple staging. The song just never did enough. Disappointed that Slovenia’s abbreviation is now SVN, not SLO. Portugal has changed from POR to PRT, and Greece from GRE to GRC. Why? Perhaps SLO might suggest Slovakia. Not sure why others had to change.

Nice enough song; really struggled to get a cohesive group dynamic going. That’s always the struggle with vocal groups, as it can often seem like people standing around randomly singing at each other.

Nice stage presence made up for an average song. Let’s hope Finland return to an open selection next year as the past two years haven’t worked.

The first screeching note set an ugly tone for this, as this style of “scream singing” is simply not my thing. Either they toned it down a bit for the rest of the performance or my ears became desensitised, as I managed to listen to it all and found it not too offensive. The song was always quite good.

Boring song. Nice stage visuals. Wearing black meant he disappeared into the background at one point.

Keep on going… to the airport. Oto tried hard and the visuals were nice. The song simply was never good enough.

Wake me up when something happens. The naff drums only harmed a song that never delivered on its promise, especially coming from the same writer behind Blanche’s City Lights from 2017. While Wake Up was quite evocative in the same way City Lights was, Eliot was a bit lost at sea, and the whole presentation needed a reinvention. It need Blanche.

Atrocious. How anyone sees anything in this remains a mystery. Ideally I’d score it -2 for the two degenerates on stage that ruined 3 minutes of potential, blissful silence.

The first seven songs called were all among my favourites, so I was a very happy boy by then. While Iceland wasn’t a surprise next, San Marino followed as one of my lesser favourites, and then Slovenia appeared last. They were an understandable finalist, too, given their unique style. While my scores suggest Iceland and Slovenia out for Finland and Belgium, we’re really scraping the barrel here, as other than Greece, Belarus, Serbia and Australia, it was a fairly forgettable lot.

Average score for this show is a lowly 5.4, which is 1 full point below the semi final 1 average last year of 6.4, and way off the record of any show – Malmo’s first semi at 6.9. An average of 6 is the benchmark score for a good show, as my score of 6 literally translates as “good”!

My Top 10: Belarus, Australia, Serbia, Greece, Estonia, Czechia, Cyprus, San Marino, Belgium and Finland. Only two of these – Estonia and Serbia – were in my top 10 before Eurovision, and both survived. The second semi final will likely be different given it is the loaded semi final.

One of the the real highlights of this show was Dana International – Israel’s winner in 1998 – during the interval performing Just The Way You Are by Bruno Mars. A really emotional and stylish performance, and she still looks great at 50! The postcards were super cool too, showing the artists visiting various Israeli locations, and dancing away. So much fun!

The negative, and it’s a big one, was the disgraceful commentary by Australia’s duo, Myf Warhurst and Joel Creasey. Quite good in their first two years, they degenerated into constant, inane chatter, spoke over both recaps, were ignorant (Spain last year were a real couple, bozos) and, rudest of all, spoke over the interviews of Spain, France and Israel. They seem to forget they were there to commentate on Eurovision, not talk and giggle among themselves with Eurovision in the background. Looking for much better in semi final two.