It’s time for the post that’s fast becoming one of my most favourite and anticipated to do – the Battle! This is where the most recent Eurovision Song Contest battles the defending champion in a direct song vs song contest. The current champion is Kyiv 2017, having beaten Stockholm 2016 in the inaugural battle, and then whipped Lisbon 2018 last year. Now it’s time for Tel Aviv 2019 to dare to dream. Eventually I will add battles against older contests, and the plan already is to hit Kyiv 2017 with Kyiv 2005 if it keeps winning. Originally that was meant to be if it beat Tel Aviv 2019. Due to the loss of my mother last year, motivation was sapped to do much, and I totally forgot about this post until two days ago. So, with the national final season for 2020 already underway, I’ll wait to see if Kyiv 2017 wins this battle and beats Rotterdam 2020 as well.

The scoring is quite simple, and works just like a round of boxing. The winner gets 10 points, and the loser 9 or less depending on the superiority of the win. It’s 10 points each for a tie, which I’ve never done before. I really do strain to declare a winner. What if  a country has boycotted one of the years, like Ukraine did in 2019, I hear you ask? It’s simple. I judge the single entry in isolation, and if I like it, that’s plus +1 for the year, otherwise it’s -1 for the year.

Songs are presented in alphabetical sequence by country, with key rounds shown. Before spotlighting a few, I should say that Kyiv 2017’s first four songs of Albania, Armenia, Australia and Austria are quite weak, and typically that’s at least 3 rounds lost, and often by more than one point. Against Tel Aviv 2019, they lost all four rounds with a total deficit of 7. Yes, as we reach the fifth country, Azerbaijan, Tel Aviv 2019 already has a lead of 7 points.

Azerbaijan clawed back two points for Kyiv 2017, then Belarus regained them for Tel Aviv 2019, then Belgium clawed them back for 2017. Kyiv 2017 gets the bonus point for Bulgaria and then begins to exert itself.

No surprise, Kyiv 2017 has fought back and now scores are level. They’re not twice champions for nothing. Estonia was a pivotal contest last time where Lisbon 2018 (Elina Nechayeva with La Forza) edged out Koit & Laura. That’s reversed this time as Victor’s somewhat clumsy performance hurts him sufficiently to lose the round for Tel Aviv 2019. This marks the third win in a row for Kyiv 2017 as Martina Barta beat Lake Malawi 10-8 for Czechia and Denmark’s (and Australia’s!) Anja Nissen beat Leonora 10-9.

After Tel Aviv 2019 wins the next two of three rounds, it’s back to just a one point lead to Kyiv 2017, so can Tel Aviv 2019 Keep On Going? Yes, out the door. Keep The Faith was one of my favourites in Kyiv. A super song with superlative vocals, so Tamara swamps Oto’s ordinary effort to give Kyiv 2017 a 4 point lead. The question now is can Kyiv 2017 Keep The Faith and take the win?

Due mostly to the dreadful Hatari and a 10-7 loss for Tel Aviv 2019 in the Iceland round, Kyiv 2017 is now 8 points ahead. This was easily the toughest round to decide ever, and ultimately I scored it a draw. I loved those sisters so much, especially their harmonies, and while Arcade is a better song in a pure sense, when comparing the two entries as a package, I can’t split them.

Norway followed Netherlands, and with it JOWST vs KEiiNO, it’s no surprise my personal favourite Eurovision artist to ever tour Australia won 10-8. Tel Aviv 2019 closes the gap to 6 points.

Due to the deplorable entries of San Marino (Valentina Monetta & Jimmie Wilson with Spirt Of The Night) and Spain (Manel Navarro with Do It For Your Lover) for Kyiv 2017, Tel Aviv 2019 scored two 10-7 wins to close the gap to 2 points, and there’s just 3 rounds to go. I’ve loved Timebelle’s entry all along, and Runa must be the funniest and most interesting Eurovision artist on Instagram. Zibbz actually swung this round for Switzerland in 2018 so can Luca Hanni do it for Tel Aviv 2019? No! As much as I liked She Got Me, I prefer Apollo, and every time I listen to it, I think of being marooned on a lagoon with Runa under the moon. So is Tel Aviv 2019 marooned. United Kingdom adds a 10-8 win for Kyiv 2017 and then Ukraine adds a bonus point. 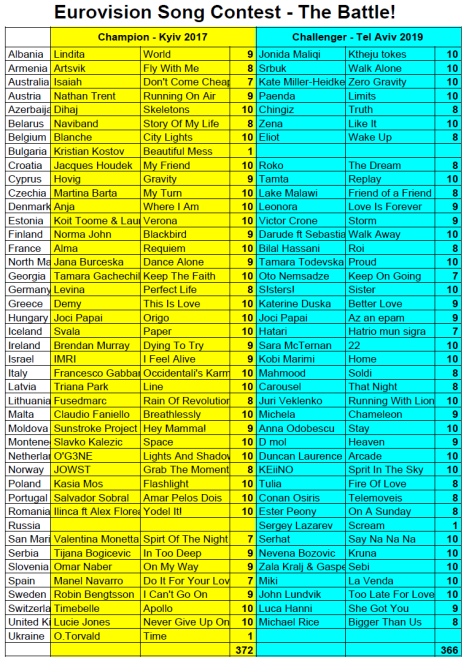 As I scored each round, I sensed Tel Aviv 2019 would win this battle, especially due to the horror start for Kyiv 2017 and the two 10-7 losses near the end. As it stands, Kyiv 2017 is indeed proving to be a consistent year, and those big losses were offset by several weak and comparatively weaker songs for Tel Aviv 2019. Notably Iceland and Italy in the middle, and three 10-8 losses in a row in the latter stages due to Poland, Portugal and Romania.