Ukraine will not participate in the 2019 Eurovision Song Contest in Tel Aviv after a calamity of events and political grandstanding that saw their national final winner, MARUV, who won with Siren Song, refusing to sign a heavily restrictive contract with broadcaster UA:PBC. When second and third placed entries, Freedom Jazz and KAZKA, also refused to sign, Ukraine were left with little choice than to withdraw.

This is great news as Ukraine’s national final, known as Vidbir, descended into farce with artists interrogated on stage about any perceived loyalty to Russia and an announcement during the show that the broadcaster reserved the right to select someone other than the winner for Eurovision. The most notorious confrontation of all was Eurovision 2016 winner, Jamala, disgracing herself when demanding MARUV answer whether Crimea belonged to Ukraine. She posed the question as a journalist might in Tel Aviv, so asked in English to ensure maximum viral opportunity. MARUV answered “Ukraine, of course”.

In explaining the withdrawal, UA:PBC said:

The national selection this year has drawn attention to a systemic problem with the music industry in Ukraine – the connection of artists with an aggressor state with whom we are in the fifth year of military conflict. Whilst for some, these links are acceptable, for others it causes indignation and unacceptance. Given the current situation, and following Ukrainian law on public broadcasting, as well as conditions of excessive politicization of the national selection process, UA:PBC has decided to withdraw from the 2019 Eurovision Song Contest.

The obvious question is why these artists weren’t vetted beforehand. That’s the point, and where the sinister intentions of UA:PBC becomes clear. Vidbir, as a national selection for Eurovision, was designed this year to humiliate artists on stage by using even the remotest connection with Russia, like performing there years ago, to ascribe treachery, and also to warn others not to imperil their careers by any future plans to perform in Russia. It was a total sham, and it was pleasing to see other artists in the contest unite once MARUV was forced out and not allow UA:PBC and Jamala be rewarded for their disgraceful antics by taking MARUV’s place in Tel Aviv.

UA:PBC laughably tried to justify their stance by saying the winner of Vidbir was only…

The problem here is the contract itself, which would see MARUV muzzled, constrained and forced to become a political propagandist. What UA:PBC call “commitments of becoming a cultural ambassador of Ukraine and delivering not only their music but also expressing the opinion of the Ukrainian society in the world”, MARUV saw as a pawn for a political agenda and contract demands that were impossible to honour. In an impassioned Facebook post (automatically translated from Ukrainian), she listed those unreasonable demands:

The last 24 hours have been the most emotional in my life.

I have won an honest victory in the national preselection for the Eurovision-2019, receiving maximum support from the viewers and a high ball from the jury members. But now our victory with you want to take away.

I am ukrainka, love my country and proud to represent Ukraine in Tel Aviv at the international contest “Eurovision-2019” despite the fact that in a day I received proposals from three different countries to represent them. But my answer is categorical – I perform from Ukraine and no way else!

You probably have already heard about the contract between the participant from Ukraine and ntku, which should be signed today before lunch.

I’m ready to give up on performances in Russia. Live answered all the questions that the jury was interested in. I haven’t visited Crimea since 2014 I did not violate a single law of Ukraine. And also ready to take all the costs of participation in the international competition.

And now about the treaty itself, which requires me:

1. I am banned from any improvisation on the stage without the approval of the ntku. (inconsistent splits, for example, will lead to a fine of 2 MILLION UAH)
2. Immediate copyright transfer to a song belonging to the world Warner Warner Music (about these rights was known before the competition starts)
3. Clearly fulfill any requirements and indications of ntku. (in theory, I can be forced to dance at the birthday of some vice-Premiere, and in case of refusal, I will be fined and fined again to pay a fine of 2 MILLION UAH. Plus compensate for the alleged losses! )))))
4. Ban on communication with journalists without harmonization with ntku. (which completely violates the freedom of speech and human rights)

And There’s still a lot of things to do.
In Case of a violation of one of the points, a fine of 2 million uah and compensation of losses is still on the amount of. 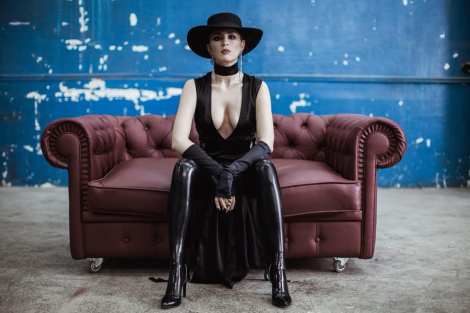 In return from ntku, I do not receive anything: neither a penny of financial support, nor assistance in the organization of the trip, nor, even more, international promo support. Even a visa i have to do by myself.

Although there are only a few points of responsibilities’s duties in the treaty:

1. Give me hints regarding the rules of the contest.
2. with the permission of ntku to take with you 10 people at your own expense.
3. Adhere to the terms of this treaty.

I feel the pressure! And I see obvious attempts to make me refuse to represent my country at the international contest “Eurovision-2019”.

I ask your support, support to the press and independent journalists who are not ready to perform someone’s order.

The next day, MARUV would clarify she was prepared to cancel concerts in Russia:

Today our meeting with ntku lasted about seven hours, as a result of which, we never came to the agreement of the two sides.

A few hours before the draw I was asked to participate in the national preselection for “Eurovision-2019”. I agreed and won, and with great pride I was ready to represent my home country – Ukraine at the international song arena.

As previously i said, rejection of concerts in Russia was not a principled thing for us. The main differences have been caused by other paragraphs of the treaty, which, if I sign, become a indentured for me. I am a citizen of Ukraine, I pay taxes and sincerely love Ukraine. But not ready to perform with slogans, turning your stay at the competition in the promo of our politicians. I am a musician, not a bat in the political arena.

I sincerely thank and appreciate everyone who believed in me and voted. And I ask you to accept this fact and not to go to confrontation. This is the given of today. I want to give my creativity without censorship.

Tomorrow I will wake up with new forces – to win and popularize my music in the world.

On the European Broadcasting Union’s part, they expressed “sadness” that Ukraine withdrew and there “will be further discussions between the EBU and UA:PBC on this matter”. Real discussions should have taken place in 2016 when Jamala’s controversial song, 1944, was Ukraine’s entry. Clearly a political song designed to link the 1944 expulsion of Tartars in Crimea with the events of current day Crimea and the Russian annexation, it could easily have been called 2014, and should have been banned. Instead it won Eurovision, created chaos after Russia entered Julia Samoylova for the 2017 event in Kyiv, and Jamala is still using it for political purposes.

Curiously, of the three jury members at Vidbir, Jamala rated MARUV the lowest in third place of six songs. Andriy Danylko (second at ESC in 2007 performing as Verka Serduchka) rated her top while the third member (Yevhen Filatov) rated her second. That left her in second place overall. MARUV won the public vote to take the win.

The first semi final at the Eurovision Song Contest is now one country short, so surely it’s time the EBU invite Kazakhstan to participate. They’re keen, part of their country actually lies in Europe, they made an excellent debut at Junior Eurovision last year, and they are fans of Eurovision. As a bonus, they share the national flag colours as Ukraine, so it’s only the name that changes to reward the more eager. The only reason Kazakhstan are not a full EBU member and therefore entitled to Eurovision is due to a technicality that the European Broadcasting Area doesn’t quite reach them. Yet a country like Australia nowhere near Europe or the EBA get another 5 years? It seems incredibly unfair.

The really sad part of this sordid affair is losing a decent song for Eurovision. It’s been a dreary selection of songs so far, and Siren Song was one that could really sex up the stage, figuratively and literally. While its provocative nature and sexual theatrics gained it much attention, deep down it’s a throbbing entry. Dare I say, “a banger”?

News:
Ukraine withdraw from Eurovision
MARUV will not represent Ukraine in 2019