Whether it’s song fatigue or this really was an ordinary group of songs, the second semi final of the Eurovision Song Contest of 2018 in Lisbon will go down as one of the least interesting ever, and the finalists a fairly predictable and uninspiring lot. We already knew the first semi final was the loaded one, and the stark contrast in quality really put the second one to shame. Whereas I could happily take 14 from SF1 to the final, it would be only 4 from SF2, and even that’s a struggle. It was another wipeout for some of favourites too, notably Romania and Latvia, with Romania taking the same self-destruction pills that afflicted FYR Macedonia and Belgium in the first semi final. Whereas Latvia were unfortunate to follow Hungary and their ear-bursting scream-fest and crazy light and fire show. 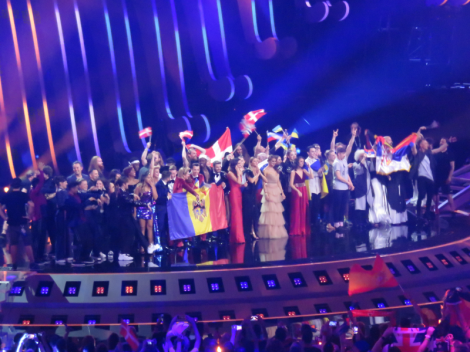 The finalists on stage from semi final 2 of the Eurovision Song Contest in Lisbon, 2018

It was good to see in the arena the crowd was heaving and it was a great atmosphere. The family show earlier in the day and the jury show the previous night were also far better attended. Partly responsible are Australians in Lisbon for Jessica Mauboy, who are in plague proportions, while European travellers typically only arrive on the Thursday, especially if their song is in SF2. Those here for a broader holiday (cough, cough) or their song is in SF1, will likely do both semi finals.

One of the most improved songs, providing impact and performed well.

The most original, clever and well executed presentations ever.

Set the stage on fire, literally and figuratively, and while metal rock might not suit many Eurovision ears, you can’t fault their energy and delivery.

Ukraine – Melovin – Under The Ladder (6)

Another song I enjoyed better here than from the national final, and was one always a certainty to qualify.

Sweden – Benjamin Ingrosso – Dance You Off (2)

Never cared for this, being a really cheap and derivative song, and it’s only memorable due the lighting effects.

Australia – Jessica Mauboy – We Got Love (7)

Despite all the whinging Aussies with outrageously high expectations during the rehearsal phase, and were critical of the dress, the lighting, the dance moves and, occasionally, even the singing, all elements were fine and Mauboy was always a certain qualifier. Naturally they’re all back on board.

Norway – Alexander Rybak – That’s How You Write A Song (6)

Rybak has suffered some ridiculous hate from (jealous) fans (including from Australians) for no real reason he’s a success and so accomplished. Whether you like his style or not, at least respect him, and also appreciate that, as a former Eurovision winner, he entered Melodi Grand Prix and then Eurovision with little to gain. He waited 9 years, brought a superb presentation, and performed well. My issue is only in in the song itself, which repeats the same line too often, and gets a bit silly. So it would be a much higher score if the song was more conventionally structured. Otherwise, I love the melody, I love the passion, and it’s been a privilege to see this former Eurovision winner up close.

A song that’s been more about the viking vibe than anything great in isolation. The snow effects at the end were cool.

A backing singer to ManuElla in 2016, I appreciated this much more than at the Slovenian national final, probably because I was too biased to someone else there (ManuElla).

Another improved song, even despite the strange African dancing. They were ecstatic to qualify, if the plethora of f-words by the dancers is any indication, and it was a repeat scenario for Waylon when they he appeared as one half of The Common Linnets in 2014 and was picked last.

First, let’s note Australia, an ineligible country to automatically enter Eurovision and isn’t lumbered with all the broadcast and financial obligations of full Eurovision Broadcasting Union members, has taken a spot from one of those members for the third successive year. This is patently unfair, and the EBU either must adjust their rules so Australia can be a full member, take 11 countries from Australia’s semi final and ensure Australia is in the larger semi final, or end this ongoing special invitation nonsense altogether. It was a novelty the first year (and fair enough as a “once off” for the 60th anniversary edition), fun the second year, a concern the third year, and disturbing this year – especially that so many good songs went out in the first semi final. Without Australia, one of those would be transferred into SF2 and likely an automatic qualifier.

Another self-destruction like FYR Macedonia and Belgium in the first semi final, and that makes it the first time ever Romania has failed at the semi final stage. Blame all those mannequins on stage. They looked ridiculous. With rock songs, you just sing the damn things, and rock out! You don’t need daft props and strange choreography. Where was the air flinging and raunchy style of Cristina Caramarcu like at the Romanian national final, and why were the band standing still like dummies when the music suggested they should have been ripping away on their guitars? This could have been a Polina Gagarina A Million Voices moment if they kept it simple. Total dummies!

San Marino – Jessika ft Jenifer Brening – Who We Are (8)

Justice for San Marino and robot rights! While I loved this bizarre entry, and it’s low quality nature actually made it so endearing, it was an predictable non-qualifier. Had they qualified, I would not have cared about the rest at all. It’s a shame in a way, because the girls excelled, as did the robots, and the “sometimes… size doesn’t matter” sign the robot displayed had me in hysterics for the remainder of the song during the jury show. During the family show, the sign was “on thursdays… may the 4th be with you”. It (4 May is Star Wars Day) was actually a Friday this year. Anyway. That’s what I mean by San Marino having “trainwreck charisma”!

This was an actual trainwreck. It seemed so undignified seeing Julia perched at the top of that thing, especially as she was wheeled in and out. Then the backers were too loud, dominating the chorus, and the dancing and distraction, and the song was simply the wrong song for her. Last year’s aborted entry of Flame Is Burning was so much better. Russia is also another country, joining Azerbaijan and Romania, to fail to reach the final for the first time ever. They’ve been dropping like flies at this Eurovision! Only Ukraine remains of EBU members to have a 100% record of qualifying. Watching Julia after the winners were announced, you could see she was sad, wiping away tears, and many people hugging her. She probably feels great shame at this unwanted accolade so let’s hope the Russians welcome her home. Her entire Eurovision experience has been more an ordeal than a great memorable adventure it is for others, first with the ban last year and now this ignominious result.

The invisible act this year, and barely raised any interest in the arena. Only towards the end did it pique my interest.

I wonder if the surfing theme for the postcard had anything to do with Gromee sounding similar to grommet, a kid surfer? There was never much to this song and they did their best to provide an energetic display. Probably one the only surprise to miss, and that’s only a minor surprise.

Often with Malta, they bring all the fireworks and effects, and it all blows up in their face. Simply tried too hard and over-complicated the entire presentation.

One of my favourites coming in, it really had a sense of fatigue about it. Then appearing on stage right after Hungary, it was too subdued. Not that Laura should have changed anything. She’s been great on social media too, so I feel a little sad for her.

I enjoyed this during the jury show, then it was back to its ho-hum status.

My top 10: Moldova, San Marino, Romania, Hungary, Latvia, Ukraine, Norway, Australia, Poland & Serbia. Six made it through, as did 3 of the top 4. Outside the top 4, I couldn’t care that much about the rest, especially when the prejudice against robots at Eurovision continues.

The average nature of the show is validated in the average score of 5.5. That could be one of the lowest ever, noting that SF1 was 6.4 and decent shows average about 6. From my personal top 10, another two songs were wiped out – Romania and Latvia – meaning 6 of my top 7 are now gone, with Spain at 10th favourite automatically in the final, and Israel (9th favourite), Lithuania (8th) and Estonia (1st) qualifying from SF1.

Obviously I’m hoping for Estonia to win, with Israel, Lithuania, Spain and Moldova filling out my top 5. I’d happily take Israel for the win, especially after the disgusting comments about Israel’s song from last year’s winner, Salvador Sobral. He was aghast that Youtube even suggested Israel’s song to him, and upon listening to Toy described it as “horrible”, and “fortunately, this year I don’t have to hear anything.” While he’s entitled to his opinion, he needs to remember, as the previous year’s winner, he is meant to be an ambassador for Eurovision, or at least show some diplomacy and class. To witness the ignominy he would suffer handing the trophy to Netta would be poetic justice for this most ungracious and sanctimonious winner ever, and a total creep. Why did he even enter Eurovision if he despises it so much?

The betting markets have been all over the place with punters looking for value and betting strategically, which shows there’s no clear favourite. While Cyprus has risen (from 20th song at $70) to favourite at just over $2, Israel remains near the top at $4 (dropping from $2.75), as does France around $12. Estonia has been up and down like a yo-yo, and is now down to $40 (I might have another bet on them), while Ireland is up from $200 to about $20 and Germany up from about $60 to $20. Australia, Czechia and Bulgaria are the big drops.

Betting odds as of late April before rehearsals started (above), to the day before the grand final (below)

It could go the obvious way with Israel, or it could be a surprise. The public will support Israel en masse so it depends on the jury. They can be flaky with the more novelty or “fast food” acts. I’d skip Cyprus as a hot chance as I believe that rush of money was a combination of juicy odds and an unexpected great presentation for a song that’s still quite cheap. If there’s a mood for “music with feeling”, then I’d place Lithuania or Ireland way ahead of Germany. Europe rarely ever votes for them, and that’s despite a quality entry this year. Same situation with Spain. A top 10 for both would be a strong result in the circumstances. France is the unknown. It’s been a fan favourite from the start, for reasons I don’t fully understand, so I’ll watch with great curiosity.

We’re back to Netta with Toy. It’s quirky, it has the fan support, and should have enough public support to compensate for any drop in the jury vote. With the EBU modifying the jury scoring system that reduces the impact of the total score being significantly reduced by an individual juror ranking the song low, all the golden lucky cats are aligning for Israel.

An interesting look at how the running order is decided