A solid, even semi final meant several good songs would miss the final, and that was the case last night at the first semi final of the 2017 Eurovision Song Contest in Kyiv. While Finland, Iceland, Georgia, Czechia and Latvia could all feel slightly aggrieved, who do you toss out? As much as a few of my favourites missed out, the jury and public got it fairly right. 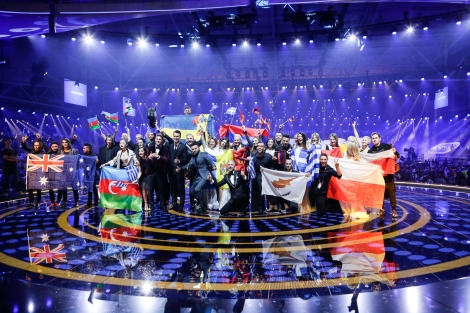 Made the most of only a reasonable song.

A man with a horse head on a ladder and scribbling on a blackboard, this made no sense to me, and it was totally outside my imagination. Great vocals and song drive the score.

One of the few people that love this song and Demy didn’t disappoint, despite a presentation devoid of elaborate choreography and a troupe of dances that I normally expect from the Greeks. I was proud to call Greece just as they were announced as the third finalist!

Brought the national performance and looked a sleazier than ever. It didn’t quite work as well due to the bigger stage, not that I’ve ever been a great fan of the song, nor would it matter to the result.

There’s only so many times you can see a scruffy guy sing a dreary song. Nice background at least.

Vastly improved from the national final performance after the vocal gymnastics were dialled back to deliver a simpler and classy version of the song. Loved the staging too.

For a song I’ve never liked, this was great – as I expected it to be! The song lent itself to a stylish presentation and Armenia rarely let you down.

It certainly did come cheap. This was a disaster. The vocal flourishes added were to save the song, not embellish it, and only highlighted its weakness in the first place. The turntable and self-glorifying visuals lacked originality, and vocally Isaiah wasn’t up to. I don’t even understand the purpose of the giant Isaiah imagery and the need to walk on a turntable. I resented when Australia was announced as the eighth finalists because that took one of the few remaining spots for several others I much preferred. It’s a shame we qualified because missing out would have been a great learning experience – especially not to compromise on artist or song selection. All countries lose at times (it’s two straight for both Finland and Iceland now) and we to experience this to become a legitimate Eurovision country. Yep, this year would have been an ideal year to miss out.

Hovig, you do realise that a balance beam is about balancing, not gravity? I expected somehow to see Hovig walking upside down. Probably that would be too expensive and complicating to bring to Kyiv. A great original song so happy he made the final.

Much improved since the trainwreck of the jury final. Trying to merge intimate with energy seemed an odd decision. Don’t they understand the mood of this song? To top it of, backing vocals to finish it off. I still love the song, and that’s reflected in the score. It was a mix of confusion and excitement when Belgium was announced because I totally had forgotten about them!

A real goosebumps moment. Stellar vocals and great staging. I’m glad she left the propaganda images from the national final at home. Like many of those going home early,

Always destined to struggle with a song compromised by being cut to three minutes and relying on a sustained surge of loud vocals. She looked hot, if that counts.

Slavko finished off a horror phase of multiple trainwrecks. He couldn’t sing and the entire presentation looked like a random series of running about the stage and waving the stuck-on ponytail. At least he was entertaining!

We saw the same at the national final and it was good. Personally never a huge fan of the song, so the score is primarily based on a great presentation.

Delivered as expected with solid vocals and background graphics. Probably didn’t have enough to it to break from the pack.

Hated the outfit and really expected to see a simple, elegant presentation of Martina maybe by a piano, as the song and voice combination has a hint of jazz in it. Still, I’ve always loved the song and Martina’s voice. Sad to miss the final.

A disaster. The elaborate new arrangement failed, as did the staging. Stick to the raw vocal and simple performance that got you there! I spoke a bit with Omar at the Red Carpet and asked if he was confident. From his body language, he wasn’t, and was resigned to the fact it was in the hands of the voters now.

Great graphics and energy to round off the night. One that probably just missed out.

Albania, Montenegro and Slovenia are the only songs that didn’t warrant a place in the final. As for the rest, it’s the nature of Eurovision. Eighteen doesn’t fit into 10. It was also made more difficult by having both Greece and Cyprus in the one semi. That’s probably a 12 point head start for both, which means a lot in that 8th to 12th range on the table. Also Armenia and Azerbaijan were there too, who are almost perennial qualifiers. Oh, and so are Sweden too! So it was really 13 countries fighting for five spots.

My top 10: Georgia, Greece, Belgium, Czechia, Azerbaijan, Poland, Latvia, Cyprus, Moldova and Armenia. I forgot Cyprus (as is consistent with it being the invisible country in this year’s event) when I posted my initial top 10 on twitter so have dumped Iceland to make way.

Compared to the actual top 10 out go Georgia, Czechia and Latvia and in come Sweden, Portugal and Australia. Seven out of 10 is usually my rate! From my pre-ESC top 10, the only changes are Portugal and Slovenia out for Poland and Armenia. It shows what great staging can do.

Average score was 5.9 out of 10, so it validates the feeling of a “solidly average” final. The best ones average near 7.