Some goosebumps, a few trainwrecks, and once on suicide watch. That summarised jury Semi Final 1 – the first official show of the 2017 Eurovision Song Contest in Kyiv – and the suicide watch had nothing to do with Jamala performing twice during the show. There will be no spoilers here about the acts, only a general critique. Remember, this is one person’s opinion, and mine are often weird anyway, so it won’t diminish any surprise element for you. Note that two of the finalists performed here for footage to be used in the broadcast show. They were the United Kingdom and Italy, while some mystery idiot from Spain was allowed to gatecrash the stage and present three minutes of rubbish.

First, Kyiv itself – particularly the Eurovision experience compared to Stockholm 2016 (my first ESC). Following Stockholm would always be a tough act, much like following Dami Im in a semi final, as Slovenia had to do last year (had to get a ManuElla reference in somehow!). Stockholm spoiled us so badly that Kyiv appears second rate in everything. Because of the diffuse nature of the city, there’s no great Eurovision vibe. The Euro Village on the main street is a welcome sight, until you begin to move away. Even the village itself, there’s no schedule of artists, so there’s rarely a point to check it other than the cursory sticky beak. The International Exhibition Centre is a giant shed with seating added compared to the purpose-built Globe Arena. Seats are far more distant and the energy lacks. That should improve for the broadcast shows when the arena should be packed. It’s really a microcosm for everything in Kyiv – like accommodation, transport and food options – of being a bit behind or antiquated. Eventually you adjust, and the overall experience will be equally as grand. 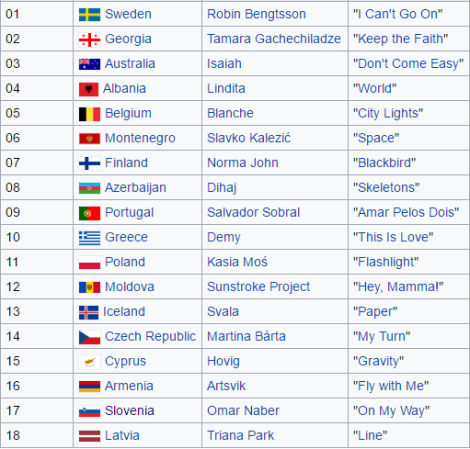 Georgia and the UK provided the goosebumps. Clearly the best vocally on the night. Excellent also was Poland, who toned down her vocal gymnastics from the national final to deliver and a clean and classy delivery of her song. Azerbaijan, despite having no idea what the whole production was about, was excellent. Armenia also excellent, particularly for a song I never liked. Fans of Iceland will be satisfied. Moldova staged really well, as did Latvia.

Sweden, Finland and Italy brought almost identical national final performances, so no surprises there. The screens were out for Portugal so the intimate close-ups critical to the staging were missing so it’s unfair to judge them. The screens were out because their placement faces the stage and would be captured in shot by some several cameras, especially the mobile camera. Czechia was great vocally and seemed to win fans; I was disappointed the staging wasn’t more simple. Cyprus stood on being an original song in the group, rather than a spectacular staging. While I love Greece, not sure if they will win new fans. Due to a technical problem we got to see Demy twice! Also, Armenia had to restart after Czechia’s music was used. That’s why these official rehearsal shows exist!

Albania couldn’t carry a song that always felt compromised from the cut to 3 minute from the original long version. Montenegro can’t sing and Belgium – my favourite this year – had me on suicide watch for a few minutes. Slovenia’s revamp failed – both the song and the staging. A shame. Finally, Australia, a trainwreck. The presentation lacked all originality, vocally it was off, and the vocal tweaks added seemed more to save the song than embellish it. Apparently they have other “tricks” up their sleeve if they make the grand final. Good luck! We do not deserve to qualify.