Australia’s Anja Nissen will represent Denmark with Where I Am at the Eurovision Song Contest of 2017 in Kyiv after a stunning win at Dansk Melodi Grand Prix last night. Once the songs were released early in the week, it was clear DMGP shouldn’t be a contest, Anja’s stellar performance on the night confirmed it couldn’t be a contest, and it proved to be absolutely no contest after she blitzed the 3-way super final with 64% of the combine jury and televote.

Under the stage name of Anja now, it was her second attempt trying to qualify for Denmark, after finishing second to the lame boy-band Lighthouse X last year. That result continued a pattern of Denmark snubbing pretty blonde women for generic boy-band gibberish, being the third such occurrence in six years after Anna Noa in 2011 and Anne Gadegaard in 2015 were similarly stiffed. There were no hiccups this year as the super final contained three women, with fellow blonde Ida Una her only realistic rival. Una ended with 26% of the vote, with  on 10%. In 2015, Anja was also set to be Australia’s first ever entry, only for Guy Sebastian to eventually get the nod. It’s been a dream for her to appear on the Eurovision stage, and finally she has done it. 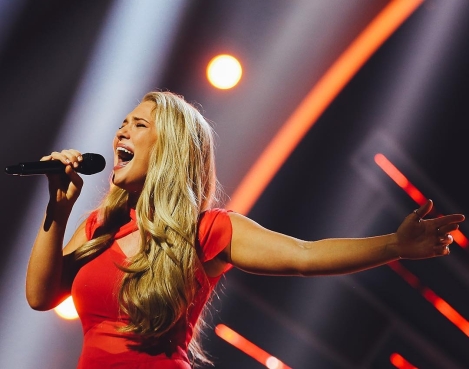 Anja wins Dansk Melodi Grand Prix of 2017 with Where I Am. Image: drgrandprix

Born, raised and living in Winmalee, just west of Sydney, of Danish parents, Anja came to national prominence through her victory on The Voice of 2014. Her coach Dill-I-Am then intervened on the plans to release My Girls as her likely debut single, preferring something of his own. Weeks later, after all the buzz from her The Voice victory subsided, Anja was lumbered with a horrific hybrid hip-hop concoction dubiously called I’m So Excited, and Dill-I-Am disappeared faster than you can correctly format his dopey name as “will.i.am”. From there, Anja has largely been orphaned by the Australian music industry, and still hasn’t been able to release her debut album. Only a compilation of songs from The Voice is out there while, curiously, My Girls ended up being Australia’s entry at Junior Eurovision 2015.

Being treated like crap in Australia, it was a wise move to try energise her career in Denmark, especially since much of her family still live there. She co-wrote Where I Am, and has been writing since her victory on The Voice, so maybe that debut album will finally arrive. As for Where I Am itself, let’s be realistic, it’s not in the highest echelon of greatest songs ever written. While it is well constructed and does stick in your head, it’s best attribute is it’s the perfect song for Anja to showcase her smooth and powerful vocals. Since winning The Voice, those vocals have flourished, almost as much as her Danish has. In her niche, there’s few better sounding female vocalists out there, and if we learnt anything from last year with Dami Im, to excel at Eurovision you need some sort of X-factor to captivate the audience, and a compelling vocal presentation can help lift any song. In fact, it was her vocal abilities, to provide key memorable moments, that proved decisive in her victory. Ida Una, as much as her song was also really good and easily my second favourite, delivered a somewhat bland performance.

Watching DMGP this morning has been one of the great Eurovision experiences personally. A few tears welled, and this was only a national final. Imagine if a personal favourite, or Australia, ever won Eurovision itself, it would be the craziest thing ever. Maybe it’s best not imagine. Anja’s win made me proud to be an Australian, and no doubt the Danes have warmed to her, especially with her progression learning Danish. After restricted to basic sentences last year, this year she seemed about 80% proficient, only resorting to English to express accurately personal and profound feelings. She’s such a genuine person too, and still seems unsure of herself at times. That’s until she gets on the stage where she becomes an animal. She’ll be a great ambassador for both countries in Kyiv, and is also a wonderful example to celebrate the diversity of our famous multicultural society, being the first blonde white girl we send to Eurovision. Actually, we didn’t do that, Denmark did that. Mange tak!

3 responses to “It’s Anja Nissen for Denmark (and Australia)!”