With the Eurovision Song Contest of 2020 cancelled due to the COVID-19 (Wuhan Coronavirus) pandemic, the big preview that normally comes at this time of year will be replaced by the mini preview. While it seems a bit pointless without the scheduled event in Rotterdam this year to bother with any preview, truth is it’s still worthwhile to take a cursory look at the betting market, and speculate about the likely finalists and eventual winner. 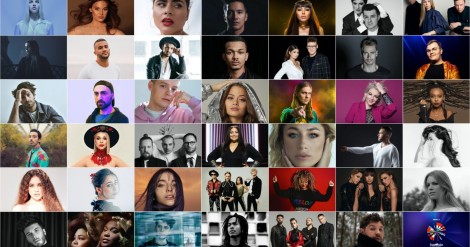 The artists of Rotterdam 2020

For a review and ranking of all the songs, check my Fab Five post. 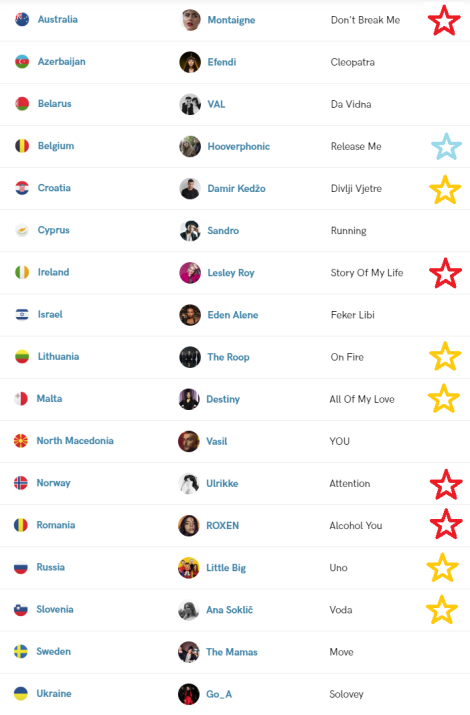 Red are my hot favourites, yellow my warm favourites, and blue by cool favourites. I only mark songs until I reach the threshold of 10 finalists, and the final song selected was Belgium. Only Azerbaijan offered some second thoughts. The rest, not interested to see progress. Other than Sweden (they rarely miss), and perhaps Azerbaijan and Ukraine (also have strong records), I couldn’t see any of the others making the final. Israel could be a chance, as Eden Alene is an engaging artist and might overcome her weak song. The songs most at risk in my top 10 would have been Slovenia, Belgium, Croatia and Ireland. That means Australia, Lithuania, Malta, Norway, Romania and Russia were guaranteed finalists.

Seven hot songs and five warm ones means this easily was the strongest semi final, and I haven’t even marked the fan favourite of Iceland. Needing to cut two for my top 10, it’s tough. Finland must stay. Probably out goes Armenia. For the sake of diversity and some frivolous fun, I keep Serbia over Georgia. I’d say guaranteed through would have been Bulgaria, Greece, Poland and Switzerland, which leaves Albania, Denmark, Estonia, Finland, Moldova and Serbia at risk. Curiously, I could only see Iceland kicking out any of my top 10. I just don’t know which one.

Ignore the rank and look at the odds themselves. These were captured the moment Eurovision was cancelled on 18 March and they show six songs roughly equal at $6.50. While Lithuania was the favourite for many people among the first 10 songs released, that was mostly because they stuck out against a mostly boring bunch. Iceland has always had their fans, while Russia is up there early simply by reputation and held when Little Big were announced as their artist. Their song, Uno, further reinforced their position. Sweden are always up early for similar reasons to Russia, so seeing them only 12th shows the public went cool on them. Remember, “what the bookies say” that you so often here is actually fluctuations based on betting money from the public. A computer then calculates the odds so the betting agency always tries to win. There’s no humans saying or deciding anything. So to drop from a high level like Sweden did is a dramatic move.

Most curious of the top 6 are the two right at the top. Bulgaria has a good recent record at Eurovision, an interesting artist, and a beautiful song. Also in their favour is that two slower songs have won in recent years, notably Netherlands last year and Portugal in 2017. Their issue is whether there’s enough to the song to enamour the audience for the duration. In contrast, something like Lithuania and Iceland is more fun, quirky and engaging – especially so for Iceland. Also add Russia to that mix, along with their vote-gathering power from nearby countries. Romania combines a bit of both with it being quite beautiful, and hearing “fake news” in the lyrics and “alcohol” used as a verb. The one great shame of this year’s Eurovision cancellation is it would likely have provided one of the closest and exciting competitions ever, and we will miss it.

Of course, we’re here to make predictions and my sense is Russia, Iceland and Lithuania could steal votes from each other leaving someone else to come through. Could it be Bulgaria, or perhaps Italy? Italy have a strong record and another great song. It does need to be trimmed by 30 seconds to fit into Eurovision’s 3-minute time limit for a song, so it’s unknown how that could affect it. Based on the market, fan appeal and personal appeal…

Personally, I really do hope (I mean, would have hoped) it’s Bulgaria. They’ve been close a couple of times and I always like to see a new country win. Romania would be next and the likely substitute if Bulgaria didn’t succeed on stage. After that, Iceland would be cool, while down the list I would loved to have seen Moldova, Romania, Norway, Denmark and Poland do well.

At the annual gathering to preview all the songs (shhh, don’t tell the COVID-19 police), we scored each song out of 10 to arrive at this result.

May the 4th be with you!