Time drags when you had a heap of fun, and that’s certainly the case with Stockholm 2016. Coming down from such a memorable moment, it feels like eons ago. In contrast, it’s the inconsequential or regular things, like Christmas and birthdays, that seem to come around so fast. Of course, being at my first ever Eurovision Song Contest live, it would never be inconsequential, and that feeling remains today.

Looking back I miss the unusually glorious weather for that time of the year (forget that it’s 35 degrees on Christmas Eve in Melbourne for a moment), I miss the non-discriminatory security pat-downs entering the arena (by non-discriminatory I mean males or females would grope you), I miss our adorable hostel (2kronor Vasatan if you ever visit), I miss the hot chocolates at 7-Eleven (Australia is rubbish when it comes to convenience food), I miss the stop-offs in Tallinn (I’ll soon be back) and I even miss stuffing up my airport connection in Singapore going home (fixated on the wrong boarding pass). Most of all I miss the pilgrimage to Globe Arena for all the shows – all 9 of them. Wow! We were wise to spread ourselves about with the seating, and getting standing room for the Family Shows. Otherwise that might have become a chore. 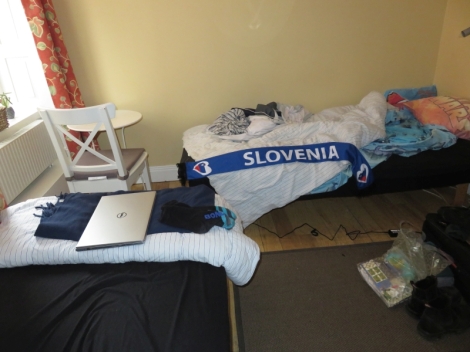 2Kronor Hostel Vasastan – my home in Stockholm for 10 nights

The big question: do I miss Eurovision? It’s been an unusual year as Eurovision is still living almost daily with me. It’s still the “latest” music I listen to on my phone. Normally there’s something that usurps it within months. Not this time. Remarkably Stockholm 2016 has held solid, and there’s still 27 songs of the original 43 still there.

IT’S ABOUT THE MUSIC…

Deleted first, after the initial courteous listen, were the songs I never liked: Greece, Romania, Ukraine and boring Frans from Sweden.

Remaining are: Albania, Armenia, Austria, Australia, Azerbaijan, Belgium, Bulgaria, Belarus, Cyprus, Czech Republic (or Czechia as it’s now to be known), Germany, Spain, Finland, France, Georgia, Croatia, Ireland, Iceland, Italy, Lithuania, Moldova, Netherlands, Norway, Poland, Serbia, Russia and Slovenia. Georgia and Netherlands might be next to go. They’ve been lucky to survive because much of my listening has been while riding a bike, and they’re decent music to ride along with. If walking I’ll usually skip them. Albania could be on the precipice too.

The big question: Do I still love Slovenia? Yes! It’s one of those cosmic connections that you feel on a molecular level, so no point trying to rationalise that I could be just one of three people on the entire planet that love it so much and everyone else is mentally disturbed.

Songs that have grown on me since Eurovision: Finland! I really get into this song so much; it’s been such an amazing transformation. It’s such a fun, happy and energetic song, and usually finds me belting out the chorus. France, which I’ve typically found boring, is another I can listen to. You could say similar for Australia and Armenia too. Both improved so much as a result of their Eurovision performance that I found a new appreciation of them. Interestingly I grew tiresome of Serbia and Belgium at Eurovision yet enjoy listening to them today.

One of the comments I made about several songs before Eurovision is that they are “radio friendly”. Ireland was the classic example, and other examples include Finland, Moldova, Azerbaijan, Netherlands, Serbia, France and Spain. Stockholm 2016 might be the quintessential “radio friendly” Eurovision.

Songs like Bulgaria, Belarus, Croatia, Cyprus, Iceland, Lithuania, Norway and Russia are those I always liked and nothing has changed there.

The songs that get a repeat listen: With Slovenia is Italy, Poland, Azerbaijan and Czechia. They would be my aural top 5. Azerbaijan is the real oddity in that lot as Samra was poor on stage whereas on audio she’s amazing. It’s a miracle! Czechia is similar in that it became a bit weary watching it live whereas aurally I love it more than ever. I’m becoming a bigger and bigger fan of Francesca Michielin that, along with ManuElla, she’s an artist I’ve been following since Eurovision. All her other songs are great too, and so is her quirky voice and persona. I exhausted long ago ManuElla’s stuff on youtube and am waiting for new music. Come on, girl! Then there’s Mr Enigma himself, Michal Szpak from Poland. I feel sorry for people that never made the connection with Color Of Your Life. Oh oh oh oooh!!

ON WITH THE SHOW…

After watching the recordings on my return, there’s been no enthusiasm to watch Stockholm 2016 again until a few weeks ago as part of the preparation for this retrospective. It’s there that Stockholm 2016 has lost lustre.

Czechia, Italy, Bulgaria, Poland, Australia, Cyprus, Serbia, Lithuania, Croatia, Russia, Finland, Iceland, Armenia, Belarus, Slovenia and Norway. These are all that I still really enjoyed. Finland’s the only one to improve from the time of Eurovision, and mostly that is from the song itself. Sandhja still looks terrible in that baby blue jumpsuit and needs to soften the angry-face nose-scrunch look when belting out a note. Italy, who really disappointed at the time, has improved even more. I really feel her passion now. Croatia really stood out as something interesting and artistic. Belarus’s bells and whistles still jingled and shrieked like the first time I saw Ivan. How Agnete from Norway failed to qualify remains a mystery. Finally, Russia… seriously, how this didn’t win, it’s ridiculous. Clearly the best package of song and performance, it’s not even close.

Netherlands, Spain, Malta, Moldova, Montenegro, Switzerland, Ireland and FYR Macedonia – these all proved watchable. Some of these songs were not among my favourites anyway, while the nature of television strips Spain of much of its energy. You need that live, pumping into your ear or something spectacular or innovative, like more of that double-vision effect at the end. Some like Switzerland and FYRM I’d ignored for so long that they proved OK. Moldova, which is a song I love, the dancing spaceman was nonsense. Montenegro had the best presentation in terms of lifting a weak song into something interesting.

I’ve bumped up Italy and Russia. That means the first 3 mirror the top 3 in my Fab Five way back in March before Eurovision. Fourth and fifth back then were Norway and Poland. Both still are firmly in the Top 10 so it’s one of those years that Eurovision itself changed very little.

YOU GIVE ME FEVER…

The big legacy of Stockholm 2016 is I still have Eurovision fever. Apparently the only known cure is in Kyiv, so officially I’m going. Along with Belarus and Lithuania, Ukraine is also a part of the world I’m yet to visit, so I’ll be combining all that into the trip, along with visiting old friends Riga and Tallinn again.

Another legacy is Dami Im’s brilliant second place for Australia. It has given legitimacy to both her and the contest. She’s been a star in many public performances since, and Eurovision is always mentioned as part of her promotion. Only two years ago, any mention of Eurovision would be greeted with skepticism, if not ridicule.

My first ever trip to Eurovision really topped off a wonderful year to remember. So many personal favourite events happened, not to mention the general drama and chaos throughout the world, so here’s to an even more exciting 2017, if that’s possible.

Most of all, thanks for reading my blog. Writing it is always fun; knowing there’s an appreciative audience makes it satisfying.

Make sure you all have a Blue And Red Christmas! That’s Blue for snow and Red for love. Or if in the southern hemisphere, Blue for clear summer skies and Red for…. love!