A Disney-style song and a soaring, whiny voice, that was the winning combination in this year’s Junior Eurovision Contest held in Valletta, Malta. Georgia’s Mariam Mamadashvili, last on stage, sung her little heart out to win just ahead of the cutesy duo from Armenia, with Italy in third. Along with Ukraine’s Jamala at senior ESC in May, Mariam’s win completes a double squawk-fest of Eurovision victories in 2016 – a cacophony not heard on planet Earth since a flock of pterosaurs fought viciously over a dead fish 150 million years ago. Like Jamala, there’s no denying the technical ability of Mariam to belt out her number to peerless effect. Mzeo actually had plenty of instant appeal as a song, and Mariam is so damn cute too. Unfortunately, my ears can’t take these sort of high pitched vocals, preferring something with more character and warmth. 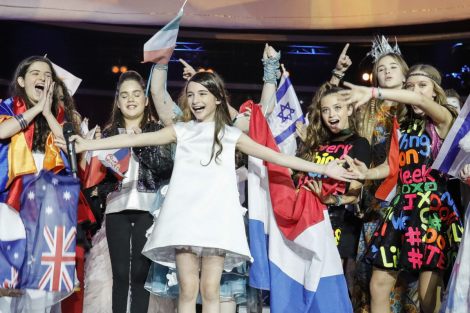 It wouldn’t be a Eurovision without a voting controversy. Curiously, Mariam was often booed as she racked up 12 points after 12 points from the adults jury to accumulate a monster lead of 45 points over Armenia – 144 to 99. The 3 experts of Christer Björkman, Mads Grimstad, and Jedward, rumoured to be adults too, only ranked Georgia 8th with 12 points, pushing her total to 156. Armenia received 23 points from the experts, to take them to 122 points and close the gap. The booing during the adults jury proved a portent for the kids jury as they only placed Georgia sixth with 83 points. The kids had a much broader music taste, spreading their points far wider, meaning their winner, Armenia, received only 110 points, to finish an agonising 7 points short. The only reason I’m referring to Jedward by name, rather than something derogatory or censored as I usually do, is because they were the only entity on the night to give Russia 12 points. Jedward, I love you! Now, please stay away from our screens for at least 10 years.

No doubt there’ll be more retrospective analysis of the voting system. Had only the kids jury been used, it would have been one of the most fantabulissimo finishes in Eurovision history. Behind Armenia on 110 would have been Malta and Russia on 105, Italy on 103 and Australia on 99. As much as the organisers want an exciting finish all the time, hence the recent decision to split adults jury and kids jury (or jury and televote in senior ESC) and award them separately, on this occasion it backfired. More importantly than that, if JESC is meant to be a kids show, why are adults voting at all? Surely artificially creating exciting finishes should take a backseat to the ideals of the show. That’s also ignoring the other inherent problem in this system, where the adults awarded 144 as their maximum and the kids only 110. It’s not a true 50/50 final result, only in points allocation. For a true 50/50 final result, you must convert the raw points into the Eurovision style 12 to 1 so both Georgia and Armenia get 12 points for winning the respective juries.

Australia’s Alexa Curtis did surprisingly well with her drab song, finishing fifth. Credit that to her photogenic qualities, solid vocals and the pleasing start to the song. It’s once the chorus starts that things begin to fall apart. By its end it seems Alexa is harmoniously going through the motions with it too. My pre-show favourite Russia unsurprisingly did rather average. That’s because my expectations were so high. On second listen, with expectations dampened, it was much better and clearly in my top two of the night. Much of that could be to do with Sofia Fisenko, who is so beautiful, both physically and vocally, and is someone I’d love to see on the senior stage before long.

The ability to bawl long, sustained high notes does not necessarily make for a nice sound.

Big note at the start, much like Malta’s winning song last year, gave high expectations for the rest of the song. It was a fun, song – the perfect style for JESC. Nice costume change and strong finish

Beautiful reprise of a beautiful song already beautifully sung. Did I mention it was so beautiful? It really was. It’s the perfect theme that a kid should sing about. I noted in the writing credits Fiamma was involved with the lyrics. So beautiful!

When three extra voices join in for the chorus, you don’t need to sing louder! The chorus was a touch loud in parts, particularly the latter stages of the song, and the choreography might have been unnecessarily elaborate. That is except for the giant heart symbol formed by all four girls at the end. Overall a solid performance of the best song of this year’s JESC. Interesting about Sofia Fisenko, the lead singer, Fisenko is a Ukrainian name. Who said JESC doesn’t unite?

Fifth on countback for such a dull song is a result beyond any young kid’s wildest hallucinations. As stated earlier, even Alexa looked like she was going through the motions by the end.

Another over-achiever. Christina turned an average song into something decent.

I spent the initial stages trying to read the writing on their clothes. That was an unfortunate distraction to a quality kids-style song that was very well performed. Kisses!

Best singer/voice combination of the competition. Best ballad too, and I loved her dress. She reminded me of Ozzie Ostrich. I wish Olivia didn’t break into English at the end because that snapped me out of her Polish trance. There are times with non-English songs that you do get absorbed with the vocalisation of the language itself, so the break to English becomes a disruption.

Fun vibe, engaging start, became repetitive. In years gone by, JESC songs were between 2:30 and 2:45 in length. There’s a case to return to this.

I didn’t hate it like previously. The first half was pleasant and then, yep, too whiny.

The most beautiful stage of the night and pleasant vocals don’t make up for a rather nondescript song.

What a pleasant surprise. I really liked this! So wholesome and sweet, it was like watching Christopher Atkins and Brooke Shields from The Blue Lagoon. There performed with great chemistry, kept it simply and stylish, and the boy sounded so smooth.

It’s Eurovision Song Contest, not Dance contest. Even then, without strobe lighting, it lacked impact.

The styling is horrible, especially the hair. Unfortunate, because this is another fun song, sung and performed well, and Dunja managed it all with aplomb on a wheelie board. Amazing! Just don’t try it in Australia. There’ll be gasps of “where’s your helmet” from our over-moralising peanut gallery.

This is one Eurovision where my pre and post rankings almost match identically. Some of that could be due to the lacklustre stage that prevented innovative and extravagant presentations (good!). Or it could be sheer coincidence. Whatever. Whereas I had Russia, Netherlands, Italy, Serbia and Poland before JESC, now my top 5 is Italy, Russia, Netherlands, Poland and Serbia – with Israel just behind. So Italy up two spots with Russia and Netherlands dropping one spot, and Poland and Serbia switching.

It proved an incredibly tough decision to split Russia and Italy, and involved 5 listens, a glass of coke, and overcoming my resistance to betray Russia after clearly liking them the most for so long. Ultimately Italy left me with that warm, fuzzy feeling you like from a JESC song. It was so beautiful! If a tie-break situation is required, the JESC stage should be it too. There’s also something about the Italian language. It’s such a naturally melodic and flowing language that lends itself to really nice songs. To round out the top 10 it would be Armenia, Bulgaria, Belarus and Malta.

The average score is 6.3, which feels quite low considering the many 7s and 8s, and two 9s. Three songs scoring 3 would have knocked the average down. Overall it remains a quality JESC, and that’s despite some of the woeful shortcomings of the broadcast. To describe it as amateur hour would be insult to time, and to amateurs. It was poor. The venue wasn’t much bigger than a school hall, the green room looked like a back ally, the hosts were wooden, and the general production and scripting were well below standards you expect from anything under the Eurovision brand. Can we also banish the heavy heart thump sound preceding each song in future Eurovisions? It’s so annoying now.

Even poorer was apparently only the eastern states with summer time (Victoria, New South Wales and Tasmania) in Australia got live coverage. That was at 2am, as was the scheduled time everywhere else. Yep, no matter your location, JESC arrived at 2am local time. On a positive note, we got the raw feed of no commentary and no advertising breaks. Woohoo! SBS will be airing a replay at the more convenient time of 1535, Saturday afternoon. I’m reluctant to say “check your local guides”, because even they were wrong for the live broadcast, with many saying 2am Tuesday morning. Oh well. Remember, JESC, like any Eurovision, it’s about the music, and this year’s one was so beautiful!